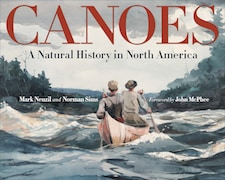 Canoes: A Natural History in North America, by Mark Neuzil  and Norman Sims. Foreword by John McPhee.
(University of Minnesota Press, 2016)
This is the story of the canoe, that singular American artifact so little changed over time. Featured here are canoes old and new, from birch bark to dugout to carbon fiber; the people who made them; and the adventures they shared. With features of technology, industry, art, and survival, the canoe carries us deep into the natural and cultural history of North America. Click for more information, including the table of contents. Click to read a review from the Minneapolis Star Tribune

True Stories: A Century of Literary Journalism, by Norman Sims
with a forward by Ted Conover
(Northwestern University Press, 2008)
This book traces more than a century of literary journalism history, primarily in the United States, examining the cultural connections, competing journalistic schools of thought, and innovative writers that have given literary journalism its power. Included are original works by Michael Paterniti, John Dos Passos, Edmund Wilson, Joseph Mitchell, and Adrian Nicole LeBlanc that serve as examples, along with a personal foreword by Ted Conover.

The Literary Journalists, edited by Norman Sims
(Ballantine, 1984)
Literary journalists are marvelous observers whose meticulous attention to detail is wedded to the tools and techniques of storytelling. Like reporters, they are fact gatherers whose material is the real world. They are consummate storytellers who endow their stories with a narrative structure and a distinctive voice. In my introduction, interviews with literary journalists conducted especially for this book show how they work and how they perceive their work. The collection includes work by John McPhee, Joan Didion, Tom Wolfe, Richard Rhodes, Jane Kramer, Mark Kramer, Sara Davidson, Richard West, Mark Singer, Barry Newman, Ron Rosenbaum, and Bill Barich.